Using your Flash for Better Pictures

One of the most common questions that I’m often asked is how to I get better pictures with the flash on my camera. Well, my friends, I am here to say one thing…take your camera off automatic! 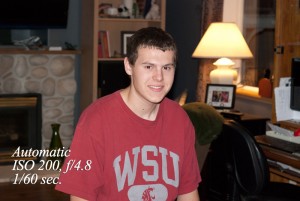 The automatic setting on your camera is great for everyday brainless photography (such as snapshots or photos where you may not have the opportunity and/or time to make adjustments to the camera), but it’s a bad choice for taking better photographs than you would normally get with flash. That is because the camera will expose the sensor for the amount of light that the flash puts out, usually rendering all the surroundings underexposed, balancing the colors for the color temperature of the flash and making the photograph look one-dimensional and flat. The result is usually a relatively ugly photo (see the example on the left).

In this example, I took my Nikon D80 camera and set it on automatic (I used a Nikkor 50mm f/2.8 lens). I left the ISO at 200 turned on the lamp behind the subject and fired away. The camera set the aperture at f/4.8 and the shutter speed at 1/60 of a second. You can see that while it is not a terrible shot, it is not great either. The background is a bit underexposed and is balanced for the cool color temperature of the flash (giving it more of a blue appearance). If this were a photo of my kids opening their Christmas gifts I would be ok with it (that is a situation where I don’t have time to make continual adjustments), but as a portrait that I might want to do something with (i.e., put in a frame on my desk or hang on my wall), this photograph would be unacceptable to me. It would take me a long time to make the adjustments in Photoshop to this image to give it a passing grade.

The solution is to just take a better photograph. My recommendation is to take your camera off of automatic and set it into manual mode which opens up the options for capturing a better image.

First, increase the ISO in your camera. ISO is basically the sensitivity of the camera sensor to light. The higher the setting, the more light the sensor will capture relative to the other settings. Keep in mind that in most cameras a higher ISO will mean a slightly grainier photograph, but with today’s advancement in sensor technology you generally won’t have to worry about that too much. Next it is essential to open up your aperture (f-stop) to a larger setting usually a small number like f/2.8 (keep in mind that a small f-stop number means a larger aperture opening and a shallower depth of field; a larger f-stop number is a smaller aperture and a greater depth-of-field). Finally, you will need to slow down your shutter speed (something like 1/8th of a second with a tripod).

Now this might take a little getting used to and some adjustments on your camera to get your photo right. If at your settings your camera is blowing out your subject (overexposing the subject) but the background looks ok, then turn down the intensity of the flash a bit (see your camera manual). If your entire picture is overexposed, try decreasing your aperture and/or increasing the shutter speed). 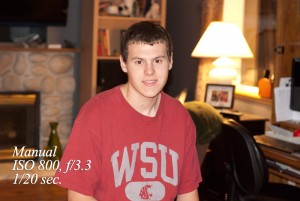 In my example, I increased my ISO to 800, set the aperture to f/3.3 and my shutter speed to 1/20 of a second. The result is a photograph that has better dimension and is color balanced much better. The background is better lit, although my lamp is overexposed I am much happier with this photograph.

And like I said before, it may take some getting used to and some playing around with your camera, so leave yourself with plenty of time and a willing subject. I have attached a video from FroKnowsPhoto that might help explain these concepts a little better. Nevertheless, happy shooting!